When I was a mother with children at home, I'd always watch and learn from other mothers whose children were a little older than mine were.  From their experience, I learned both good ways of doing things as well as what to avoid.  Some taught me practical homemaking skills, others showed me what successful mothers did, and other wonderful friends taught me how to survive when things were tough.  I treasure those friendships.

Now that my children are grown, I still learn from amazing friends who are a little farther along the path I'm embarking on.  Being a few years ahead of me in age, they have the experience and wisdom that I lack.  I look up to these women, admire them, and thoroughly enjoy their company.

Twice a week I go on a walk with two of these special friends and we talk about everything....from families, to politics, to church, to life's little aches and pains and anything in between.  They are funny, supportive and full of insight.

I think we all need friends with whom we can share our fears, our joys, our frustrations and our lives.  Friends who don't judge but who listen and share from their life's experiences.  How blessed are those who have such friends!
Posted by Momcoach at 12:52 PM No comments:

With the weather getting colder, the days getting shorter and the constant reminders at stores, I can't ignore any longer that the holidays are coming.  With holidays come holiday stresses.  When is everyone available for a family party?  What should I get everyone for Christmas?  Should I make the gifts?  If so, what?  How do I keep costs down yet not skimp of enjoyment?

Holidays are supposed to be times of love and warmth and joy...which they certainly are.  It's just the logistics and trying to get everything right (or at least, mostly right) that stresses me out.

How do other growing families handle gift giving and get togethers?
Posted by Momcoach at 1:12 PM No comments:

While mowing the lawn this afternoon, I was seriously considering downsizing.  Mowing 1 1/2 acres of lawn and taking care of another 1/2 acre of garden is not my idea of fun anymore.  Maybe it's my attitude.  Gardening and lawn maintenance provides such a good opportunity to get outside and get exercise...and not the contrived type of exercise that is done at a gym, but honest, hard work that yields visible results, both to my body and to my property.  And I DO feel good after weeding the garden or mowing.  Am I convincing?

Yet, I think wistfully about a small plot of land and a modest-sized house.  Easy to maintain, less expensive to heat and cool, smaller property tax.  But I love having space for my kids and grandkids to come home to.  I truly love my home.  Hmmm...pros and cons...

Isn't that the way it is so much of the time?  The good and bad, pros and cons, decisions, decisions.  Luckily, right now it's all theoretical.  And while I consider all the options, my grass grows longer by the minute.  :) 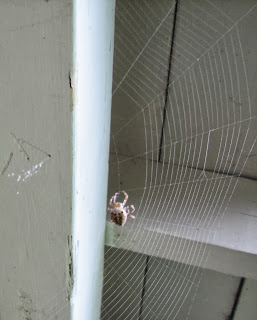 I don't know why I have such a fascination with spider webs.  I think they're beautiful, especially this time of year when the morning dew glistens on each strand and you can easily see the intricacies of the spider's work of art.  How do they know how to do it?

Of course, I don't like seeing them in the house but outside?  I can appreciate them.  :)

Yesterday, my sweet son-in-law told me he'd sweep off the webs from the porch overhang and I told him not to touch them!  Oh, I must seem weird!
Ok, it's official...I'm weird  :)

Do you remember how often you wished for some peace and quiet while you were raising your children?  Or how often you dreamed of a good night's sleep?

I got my peace and quiet but the house is too quiet now.  And even though I no longer have to get up in the night because of children waking up or stay up late, waiting for children to come home, sleep doesn't come easy.

I wonder why it's so hard to appreciate what you have right now?  Yes, I miss the energy and even the noise of my children but I love the adults they turned out to be.  I love the grandchildren they have blessed me with.  When they visit, they bring all that energy with them and fill my home again with their laughter (and occasionally their squabbles and tears too).  I have happy memories of the past and optimistic dreams of the future.  I have a comfortable present.

Will they get along?

Much as I enjoy a good relationship with my children, it makes me really happy when I see them going out of their way to be with each other.  I worked for years refereeing fights and squabbles when they were little, teaching them to cooperate, all in the hopes that when they grew up, they'd actually like each other.

Last week, through a variety of circumstances, five of my eight adult children (and their families) were in the same place at the same time, several hundred miles away.  They arranged to get together and spent an afternoon, catching up, visiting and just having fun.  The amazing thing is that I didn't have anything to do with it.  They spontaneously wanted to be with each other.  This mother's heart was all warm inside.

Most likely, I'll be gone long before my children are gone and knowing that they have each other to support and encourage through challenges and rough times, makes me feel like I've done my job...well, mostly, anyway.
Posted by Momcoach at 9:56 PM 1 comment:

In the olden days, it wasn't uncommon to see families of different generations living under the same roof.  With the world as it is today, I can see the phenomenon making a comeback.  Think of the advantages to such an arrangement...sharing resources, developing closeness with the other family, saving money, looking out for one another.  Of course, there are possible disadvantages...if the family members don't get along or respect each others privacy or take advantage of each other.

For the last few years, my family has been blessed to share our home with some of our married children and their families (not at the same time!).  Because we raised a large family (8 kids) and still live in the home they were raised in, we have lots of room.  We converted part of the downstairs into a "mother-in-law" apartment (separate entrance, kitchen, bathroom, living room, bedroom) and offered it to one of our newly married children.  They lived there for two years, saving money and preparing to go to college out of state.  It was a very positive arrangement.  Because they lived so close to us (downstairs!) we got to know our new son-in-law better and quicker than what would normally happen.  He's a wonderful young man and I love him! While they lived with us, we visited together often.  We shared food when either of us made too much of something.  And, something I really liked, the house didn't feel so big and empty.

When they moved out a year ago, another married son asked if he and his family could move into the apartment so they could pay off school debts and save money.  Of course I said yes but on one condition...I wanted them to move upstairs (the main house) rather than the little apartment because they have three young children.  They felt bad about the idea of us moving downstairs but we convinced them that it was something we wanted to do.

What a wonderful experience that has been this last year.  My home was alive with children again!  The kids were super respectful of our space and always knocked when they wanted to visit...which was often!  I loved being so close to them and playing with them and sometimes, just cuddling with them.  The bond of love between grandparent (us) and grandchildren (them) has grown so strong.  I love the little ones and I also got to form a strong bond with my daughter-in-law during the year.  She's an amazing and patient woman and I'm so glad my son married her.

As with my other children who lived with us, we shared resources and visited often, while still maintaining our separate spaces.  It was a great arrangement for us all.  Unfortunately, my son and his family are in the process of moving to another state for work.  I had hoped to have them here a little longer but support their decision to move.  But, oh, how I'll miss them!

We were really blessed to have the resources to make living under the same roof possible.  I realize that with different personalities and lifestyles, it might not have worked as well but neither my kids nor my husband and I have any regrets about sharing our home and lives.

Momcoach
I'm Laura and the mom of 8 wonderful and talented kids and the wife of an amazing and wise man who teaches computer science at a local university. I have a Bachelor of Science degree in Child Development and Family Relations and have 36 years of practical experience raising children. I love being a mom and there's nothing I'd rather do than spend time with my family!